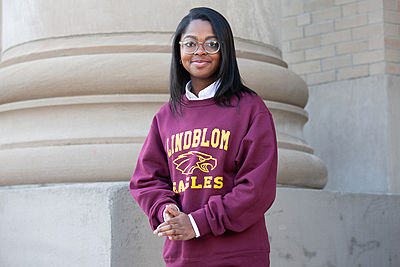 It looks a little different in the remote era, but with its just-admitted cohort, the Collegiate Scholars Program is supporting more high-achieving CPS high school students than ever

Maya Blackmon has learned a lot about new academic subjects and the college application process since joining UChicago’s Collegiate Scholars Program last year, but the 16-year-old Woodlawn resident says the opportunity to engage with diverse peers and faculty during the program’s sessions has left the biggest impact.

“Being exposed to all these different perspectives and having these different kinds of conversations with other students was very important to me,” Blackmon, a junior at Lindblom Math and Science Academy in Englewood, says. “It’s been great because everyone sort of approached things in an academic sense — we would respectfully disagree with each other but it wasn’t like people were so stuck in their own minds. I loved entering the space with an open mind and leaving knowing more about my classmates and knowing more about myself and the world around me.”

This fall, the Collegiate Scholars Program (CSP) — which aims to prepare high-potential, underrepresented students at Chicago public high schools like Blackmon for highly-selective colleges through enrichment activities and summer programs — welcomed a new cohort of students and, with 149 participants, reached the largest total enrollment the program has ever had. Fifty students were admitted to the Class of 2023 in November out of a total of 262 submitted applications. Though the program had to pivot to virtual programming in the midst of the COVID-19 pandemic, it has sustained strong student engagement and retention.

“With everything going on in our city, country, and world, the Collegiate Scholars Program provides support and an outlet for Chicago’s most talented students to continue working toward their goals,” Office of Civic Engagement Executive Director of College Readiness and Access Abel Ochoa said.

According to UChicago’s To & Through Project, most Chicago students aspire to earn college degrees, yet projections show fewer than 1 in 5 will earn one. College readiness and access programs like the free, three-year Collegiate Scholars Program aim to give local students the tools they need to fulfill those aspirations. CSP was established in 2003 after the UChicago Consortium on School Research found that highly-qualified CPS students were underreaching in their college applications. The confidence students build taking college-level courses, being on UChicago’s campus when possible, and interacting with faculty directly, helps them understand they can succeed anywhere.

Scaling up program enrollment has been the result of a collaborative institutional effort, Ochoa says. UChicago faculty, for instance, have taken on additional sections of their classes to accommodate larger Scholar classroom size; College Admissions staff have lent time and expertise and provided interns; and UChicago alumni and friends have helped to fund the program through generous contributions.

In 2016, as part of UChicago’s Odyssey Scholarship Program, CSP received an endowment gift and challenge from writer Harriet Heyman, AM’72, and her husband, investor Sir Michael Moritz. In spring 2020, the program fulfilled the challenge to match Heyman-Moritz’s $5M gift for a total of $10M in endowed funds. The financial support allowed CSP to increase the number of students accepted each year to 50, an increase of nearly 40 percent since 2016, with the capacity to support 150 students total, and to expand and provide all scholars with the opportunity to take part in the program’s summer component, typically held on the UChicago campus.

In April, to lessen health risks related to the pandemic, CSP postponed its annual interview process to the fall of 2020. Over the summer, the program hosted its first ever virtual summer academic session, which featured 19 virtual classes for 87 scholars. CSP continued offering its traditional academic year college readiness and enrichment programming in the fall via virtual events and workshops for scholars.

Angel Aponte, a junior at Jones College Prep from the East Side neighborhood, loved taking part in on-campus CSP activities and a tour of seven colleges in California — including Stanford, Pomona College, and the University of California at Berkeley — before the pandemic took hold. The latter experience helped him decide to focus his college search closer to home, he says, and with this fall’s virtual career conference, test prep courses, financial aid seminars, and other college readiness workshops, Aponte, who will be a first-generation college student, says he feels much more confident about the decisions that lie ahead.

“At first, it did seem a bit scary. It was all a big mystery. How was I going to get to go to college? Where did I even want to go? Did I want to go far? Did I want to go close? I definitely feel much more confident in the application process and where I want to go because of the program,” Aponte said. “Going to college seems much less scary to me now.” 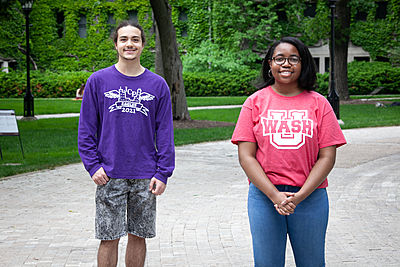 After an unprecedented year, Chicago Public Schools students graduating from UChicago college readiness programs prepare for their next chapters

This year, all 77 graduates of UChicago's Office of Civic Engagement’s college readiness and access programs were admitted to post-secondary institutions, receiving a total of $13 million in financial aid. 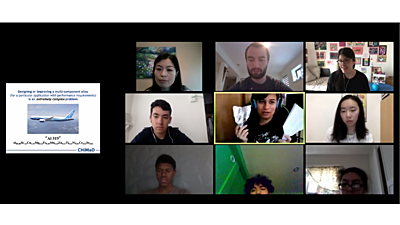 Picturing the possibilities at PME: UChicago Collegiate Scholars get a virtual introduction to molecular engineering

For the first time, Collegiate Scholars Program classes were taught virtually, due to the COVID-19 pandemic. This includes Pritzker School of Molecular Engineering's Introduction to Molecular Engineering course where students learned through at-home projects like building circuits. 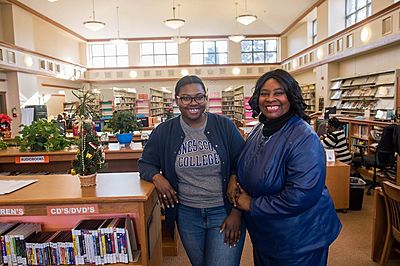